Still frame of a moment, frozen in a monochrome sign that pervades everything: Creative Director Pierpaolo Piccioli conceives the new Valentino collection following the experimental urge of a radical gesture. Stripping the palette down to a single hue, relentlessly, he does more with less, maximizing expressive possibilities in the apparent lack of possibilities.

Pink is rampant everywhere, in a total estrangement that includes the set and that is reiterated by the occasional total black and total white intermissions. Pink as a manifestation of the unconscious and a liberation from the need for realism. The accumulation of pink elements is such as to eliminate the visual shock to bring out, together, the unique character of the person, expressed by the face and the eyes, and the work on the pieces of clothing: the signs that shape them into a silhouette, the textures that give them consistency, the decorations that are part of the construction. The subtraction is, in fact, amplification, magnifying both the humans and the clothing. A variety of bodies, attitudes, and physicalities, enhanced by the monochromatic palette, bring such a vision to life.

The same frankness of the single note of color runs through the shapes: large volumes sculpted on the body by geometric tucks that highlight the gesture of tightening, sensual s-shaped lines, very short hemlines, cinched waists. Bows, ruffles, petals, lace and embroideries swarm everywhere. Shoes stand on massive platforms, which are pink too. The bags look like they were passed under a magnifying glass and subsequently altered: they grow in size, details included, or become tiny, closed by a single giant stud. Everything is touched by pink, in both the men and women’s wardrobes, even the finishes, and the hardware.

The pink-out is an experimental yet deeply human gesture that enhances individuality, capturing values and feelings. The shade of pink by Pierpaolo Piccioli, for which Valentino is collaborating with Pantone Color Institute to create a unique identity, is individual and unrepeatable in itself. 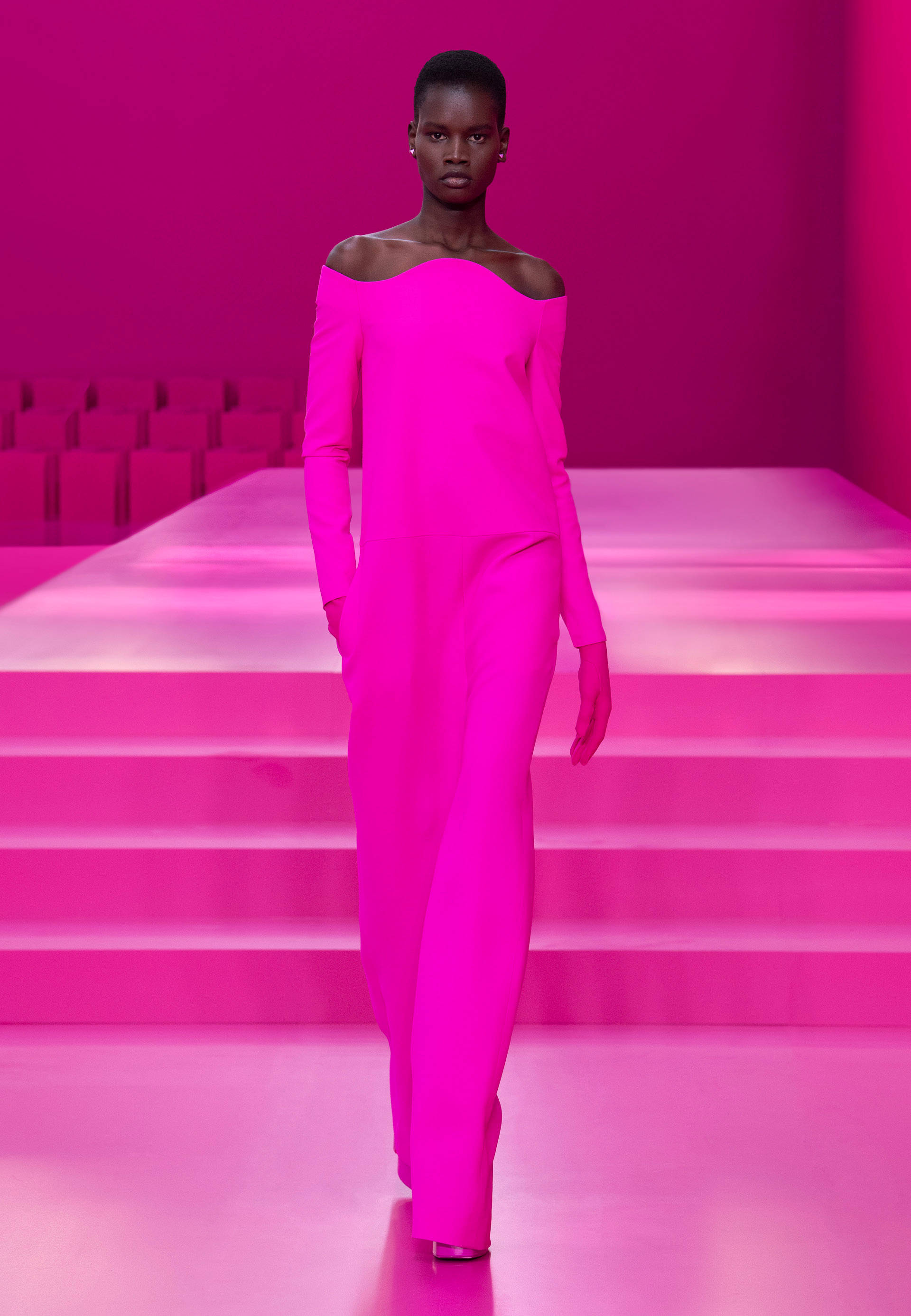 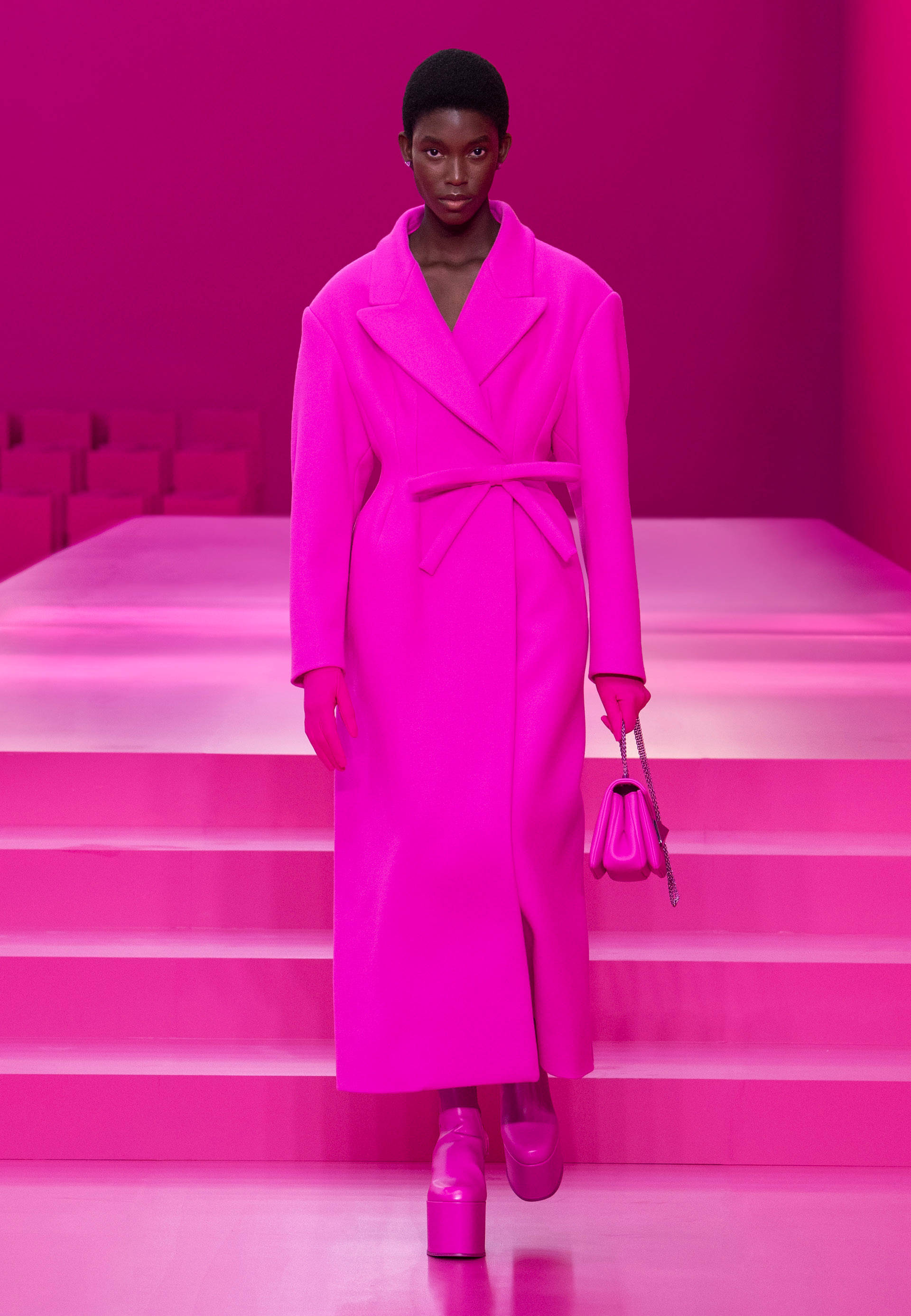 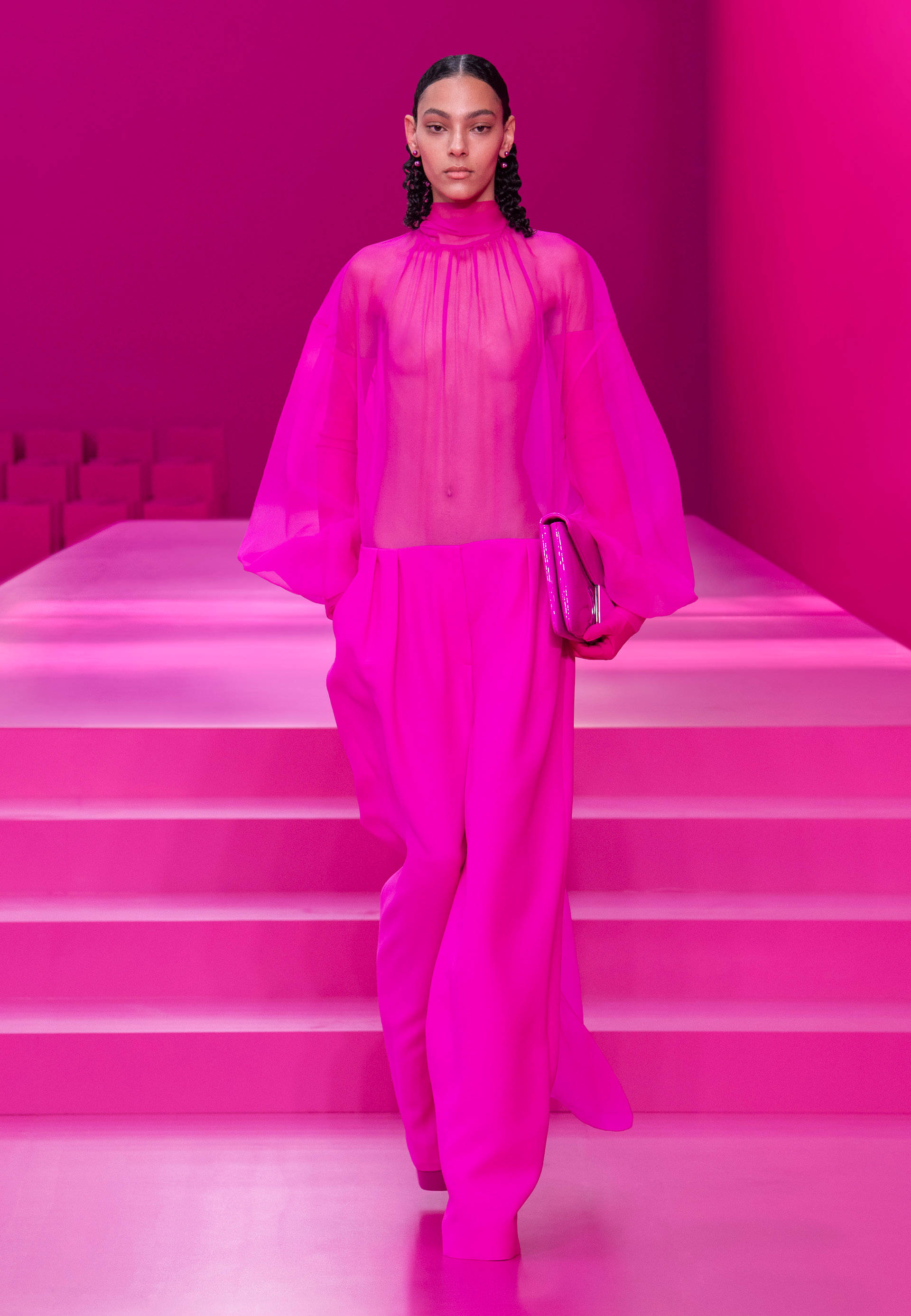 BACKSTAGE
VALENTINO BEAUTY EMPOWERS THE COLLECTION ON THE CATWALK

Sorry, your email address is not registered for this event. If you require assistance, please contact our Customer Care.

Are you sure you want to remove this item?

Please be advised that changing your location while shopping will remove all contents from your Shopping Bag.

This code has already been applied

This code is not valid

Your Promocode has been applied to all valid items

Your Wish List is full, some items haven't been saved

You have saved {0} products. Adding another product will remove the first one you saved to your Wish List.

Do you want to save this item to your Wish List and remove it from your Shopping Bag?

You can select the items you wish to receive in exchange for your return.

Shipping and/or delivery will not be available on the following days.

We are sorry, at the moment we were unable to fulfill your request. You can contact our customer service for more support.

Your session has expired. Any information will be cleared.

Items you pre-order are reserved for you, and will be shipped out as soon as they are available. You can find the estimated shipping date in the item page and in your order details.

If you order products that are already in stock together with pre-order items, they will be shipped in separate packages.

The total of the pre-order items will be charged on your chosen payment method after you order in placed.

Items you pre-order are reserved for you, and will be shipped out as soon as they are available. You can find the estimated shipping date in the item page and in your order details.

If you order products that are already in stock together with pre-order items, they will be shipped in separate packages.

The total of the pre-order items will be charged on your chosen payment method after you order in placed.

We are sorry to inform you that the selected product is out of stock. The product may be available again, you can add it to your wishlist.

After clicking the “PayPal” button, you will be redirected to PayPal to complete your purchase securely.

Please note that Gift options and Pick Up in Boutique are not offered in the PayPal Express Checkout.